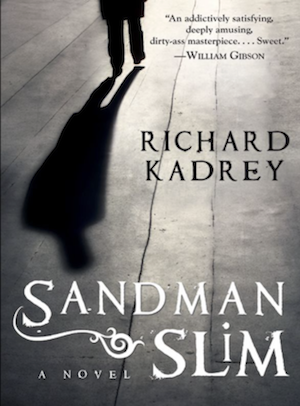 I first bumped shoulders with James Stark in a dark alley called Aloha From Hell. Richard Kadrey’s third book in the Sandman Slim series. I faithfully followed the series through the next three books. Watching Stark adapt to life outside of Hell has been a roller coaster ride through Los Angeles.

But what was Stark like when he first came home? Reading the first book never quite made it to the top of my to-do list. Until last week. Cracking the spine on a fresh ebook, I dug into Sandman Slim (2009).

Stark awakens in a smoldering trash pile, in a Hollywood cemetery. He’s just managed to kill his Hellion captor, and escape Hell through an inter-dimensional doorway. From there, his day spirals downward.

Kadrey is a machine-gun writer. Most notably, he doesn’t use chapters in the Sandman series. A small space break and the action keeps rolling. If typewriters were still a thing, I think Kadrey would deliver his manuscripts on a scroll—Kerouac-style.

The first few pages establish Start as a franchise character. The story is simply bursting at the seams.

Something funny happened to me when I was Downtown. I got hard to kill. When I first arrived there, I was the first and only living human to ever set foot in Hell. I was a sideshow freak. Pay a dollar and see Jimmy, the dog-faced boy.

Kadrey keeps a lid on the backstory. He introduces enough to explain what in the (literal) Hell Stark is talking about. But no more. By the end I had a solid picture of how Stark became Sandman Slim, “the monster that kills monsters.”

Stark is a man out place. He was sacrificed by his friends and sent to Hell for eleven years. Forced to fight for his life in the arena, he became a stone killer. Stark is not a subtle character. He’s sharp corners and venom, with a to-kill list.

If this is your first taste of the Sandman, be ready. Kadrey’s writing is an explosion of metaphor. His descriptions and imagery range from “I wish I thought of that” to “damn, where’d he get his drugs.” The fast-paced dialog matches the action.

Don’t pick this one up if you have somewhere to be. You’ll be late.

Buy Sandman Slim: A Novel on Amazon, and support me at the same time.

Now on sale at Amazon!